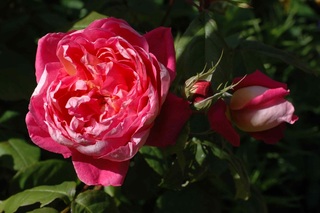 BENJAMIN BRITTEN   Another Austen.  Very tall here, would be 2 m+ if I'd let it, but like S Asma it keeps an upright substance and doesn't veer into droopy 'climber' territory, so no complaints in that respect.  The blooms are a unique combination of rosé pink, bright coral with a gold flush and the fragrance is another oddity, having a softly rounded candy-fruity quality that 'stays at home' rather than wandering about.  Healthy and uncomplaining, very slightly rust-prone but nothing really seems to phase it.  Long season, plenty of blooms, nice olive green foliage. * * * * 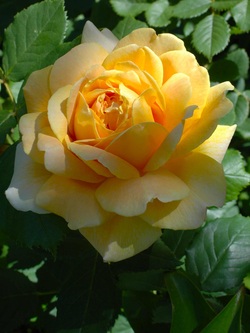 GOLDEN CELEBRATION   GC, you do test my freaking patience.  Although aesthetically unsurpassed amongst the strongly-coloured yellow roses, tough as nails and virtually pest-free, this rose is a pain in the arse.  Comes on quickly in spring with a an extremely profuse, conventional bush-rose flush of these slightly nodding and undeniably fantastic blooms; so far so good.  Goes quiet mid summer, then leaps into a monstrous growth phase that consists of throwing out enormous climber-style shoots that would get to 2.5m and more if allowed, sappy and pendant, bearing another huge crop of slightly smaller flowers at their ends.  If you lie in wait and behead the buggers before they really get going, you can control the spurt without losing too many blooms; otherwise, you've got a sprawling mess of face-planting yellow squishiness.  I forgive her, though.  Her spotless foliage and extreme vigor are better than a wimpy, fussy habit, and a vase full of her yolk-yellow, modestly-scented produce is a difficult thing to fault.
* * * * 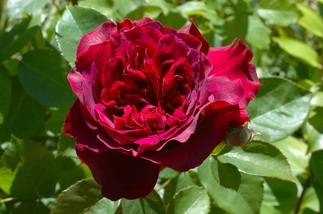 WILLIAM SHAKESPEARE 2000  If only he always looked like this.  When in good form, this rose is a beauty but I find it troublesome in the extreme, being a rusty typhoid mary, extremely thirsty, fussy and reluctant.  Having moved it to a prime position, lavished it with attention of every description it flips me off all summer long, browning its buds, producing weeny crap little flowers and smirking as it covers itself in rusty pustules.  Damn you to hell, WS2000.  One more summer of your insolence (because I paid $30 for you) and you're headed to the compost heap. * * 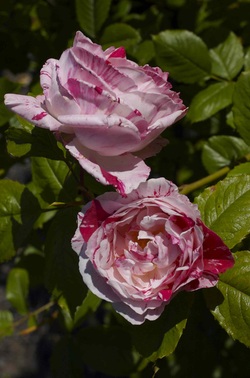 SCENTIMENTAL  Lame punned names are usually the best way to get me dropping a rose fairly smartly back onto the shelf during a nursery sale and I really wish breeders would cut that shit out.  I also wish they would stop making completely spurious claims about scent.  Scentimental is not particularly scented at all, having that vague, slightly plasticky floribunda smell but I am a sucker for a striped rose and in this respect she does certainly deliver, being possibly the most robust of the modern stripeys.
Bears large trusses of medium-sized blooms that vary in their colour ratio with the season and daytime temps.
Appreciates an open, sunny position where she can extend and really go mad with the floral production.  Like most floribundas she is undemanding and will grow happily even when crowded from below.
Relatively disease free; doesn't last very long in the vase so just leave the blooms on the bush and appreciate them there.  * * * * 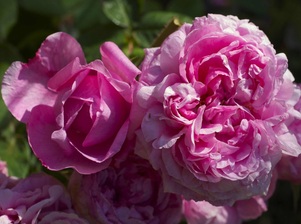 ISPAHAN  An old damask, still on training wheels in our garden but already showing a lot of promise.  The scent is quite as good as promised, rich, fruity, turkish-delighty with a touch of the tea about it; the flowers are held in very dense trusses and expend themselves in one long flush in early to mid summer.  Normally we don't truck with non-repeaters due to spatial limitations but this is a worthy inclusion; disease free even its horribly arid site to produce a good crop of blooms in a freakishly dry year.  I have moved it and will amend my remarks as it comes on next spring.  A good doer, to be sure.  * * * * 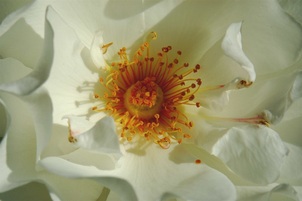 JACQUELINE DU PRE    Sigh.  Such beauty.  Her flowers are possibly the acme of that gossamer group of frilled, pink-flushed whites and in full bloom she looks like something laden with ghostly butterflies.  I find her growth a little disjointed and ungainly but she makes up for that uncertainty with an almost non-stop season and an arresting perfume composed of notes of turkish delight, myrrh, vanilla and powder, as though you are standing outside the baths of some princely haram.  Like many white roses she will scorch in direct sunlight on a hot afternoon so plant with that in mind. * * * * * 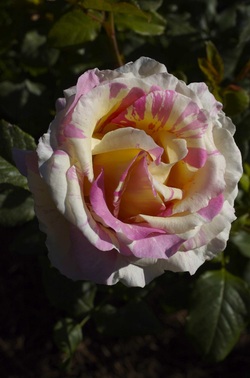 CLAUDE MONET  Another hapless prisoner of my stripe fetish and one I particularly gloat over since others seem to have trouble with him.  A small to medium bush (under a metre high in its second year here), CM is an eccentric little number with burnished olive leaves that are a perfect foil to its oddly charming combination of pale amber yellow and lolly-pink swirls.  Has the strangest smell; I detect a mixture of peanut butter, plasticine, beauty powder, sandalwood and attar but erm, yeah... some people just say it smells like a flower.
Likes a lot of sun and will sulk if shaded but didn't mind being moved to a warmer position, barely skipping a beat though I fairly wrenched the poor little bugger out of the ground and kicked dirt over his undercarriage.  I can't complain.
I have found that it will stop flowering mid summer if you don't get in and dead-head.  A wee bit prone to black spot, perhaps because of its shorter stature (I find this is an almost universal rule in a mixed planting situation) but this can be controlled with some conscientious weeding.  Which hardly ever happens here.
* * * * 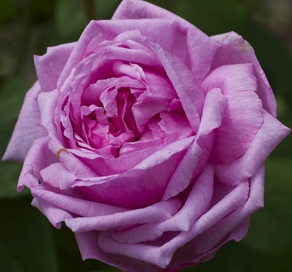 COMTE DE CHAMBORD  Damask perpetual, or Portland rose, this is an oldie and a goodie.  While its smallish and dainty, these qualities help it play well with other members of a mixed border and its perfume is swoon-worthy.  It actually smells like a rose which is a characteristic so many breeders seem to be busily eliminating from their stock.  Worth having for the fragrance alone.
A wee bit of an aphid-magnet due to the slight mossiness of its foliage, its nevertheless quite happy to bloom for a long season and the blue-tinged lilac pink sets it apart from the crowd of frousy pinks.  Will ball in long spells of damp weather but very delightful.  Loses a star only because I prefer a larger rose personally.  * * * * 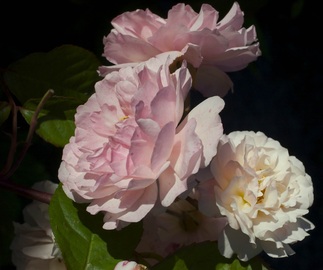 BUFF BEAUTY  A charming little scrubber that will tolerate shade and crappy soil til the cows come home, spreading in a lowish mound and covering itself periodically in these frilly, painterly blooms that range from pale buff yellow to pinkish apricot as they age and open, and according to how much direct light it receives.  Two main flushes interspersed with a sprinkling of intermittent flowers for us here.  The scent is pleasant and rounded but not nearly as strong as many sources suggest so don't buy it thinking you can't live without the smell.  Very healthy medium green foliage hardly ever troubled by blackspot; looks almost 'wild' if let go.  Highly recommended for the rose murderer and timid novice alike.  * * * *
more to come as we find the pics and take more this spring.  Keep checking back.

Beginning of August, 2013, the very start of spring for us, really- just amassed a huge group of new roses to plant out since we've brought a few more areas into cultivation.  Includes Summer Song, Simply Sensational, Crepuscule, Souvenir de Malmaison, Winchester Cathedral, Evelyn, Zepherine Drouphin, Mme Alfred Carriere, Irene Watts, Rose de Rescht, and a few others I've forgotten now!  Will post some pics once everything's sorted.  It's going to be a smelly summer (in the best possible way.)